One of the first task is setting canvas sizes. If you have  several pre-set canvas sizes, you don’t need waste your time to set a new canvas size every time.

How can you set the canvas size ? It is easy. 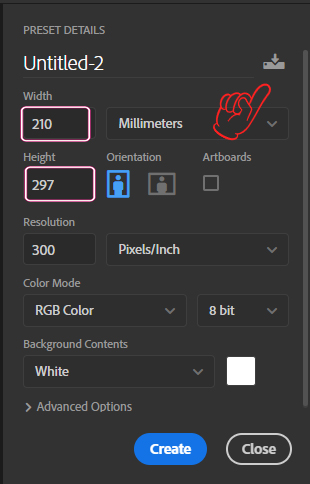 Sizes of Canvas for photos in Japan are as follows:

You can merge all visible parts as a new layer by this shortcut.

After choosing the ‘Layer Mask’, you can check the Mask’s condition. When you use the same shortcut again, you can go back to the original view.

You can zoom-in and zoom-out by this shortcut.

This shortcut is useful especially when you want to inverse the layer mask.

Sometimes we need to merge 2 or 3 selections to a selection. If so, choose the mask and use this shortcut. Arrow becomes ‘+’mark and click (not drag, just click) another mask with push [Ctrl]  + [Shift].  You can see that 2 selections are merged.

Very easy and you will use this shortcut often .

You will also use this shortcut often when you want to change the size and the angle.

If you use ‘Clone Stamp’, you had better prepare to use ‘Clone Source Panel’.  It is contained in ‘Window’.

There are some pictures which color are biased.

For example, the image is too red.

In such case, we can use ‘Curves’. ‘Curves’ is often used as adding brightness, but ‘Curves’ is also used in another unique way.

Add ‘Curves’ on the image at first.

Not only the white point, there are also the black point and the grey point.

The old woman in the image wears the clothes of Black and White. So I can use the Black point in this image too.

Next image is also biased to blue. After adding ‘Curves’, I get more natural color image. I use her hair for the black point and for her clothes white line as the white point.